INTERVIEW with April C Wright: "Infosec is like fighting an uphill battle, and it definitely takes a village" 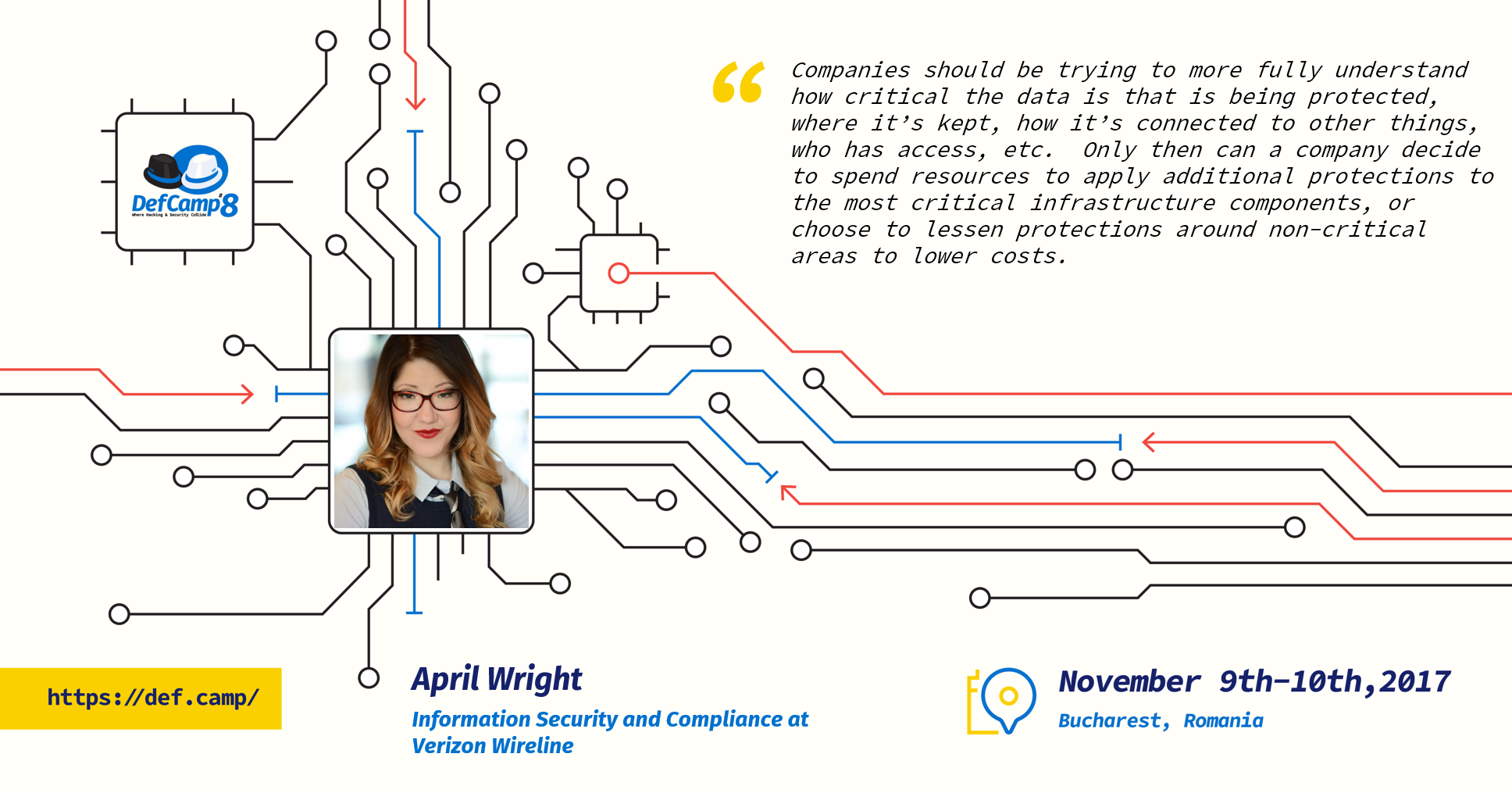 Learning from our speakers is one of the things we love most about DefCamp. Providing the right context for knowledge-sharing was one of the initial goals when we started this community-driven event and we’re happy that it still fuels us today.
So today we’d like to share some wisdom from April C. Wright, one of the DefCamp speakers whose talk is among the most anticipated. April is a Senior Security and Compliance Manager for Verizon Wireline, where she deals with the complexity of massive tech infrastructure and the people behind them. Her objective is to secure, educate and leave behind lasting security programs that make a real difference.
We first wanted to explore the topic of internal and external challenges that organizations face nowadays in terms of securing their assets and keeping them safe. April pointed out a few of the most important ones:

“One of the biggest challenges I am concerned with is that we are spending time, money, and effort to protect assets that are not completely understood. The same amount of resources are being put into securing the externally facing web server as are being put into securing a back-office reporting tool. This happens because it’s easier to apply the same protections to everything across the board than to actually suss out what data is being protected and why. So, data ends up either over-protected or under-protected. Application whitelisting, for example, is a huge pain to setup, so it’s ok to only use it on the most critical infrastructure (if not doing it everywhere is acceptable to the company’s risk profile).
Companies should be trying to more fully understand how critical the data is that is being protected, where it’s kept, how it’s connected to other things, who has access, etc. Only then can a company decide to spend resources to apply additional protections to the most critical infrastructure components, or choose to lessen protections around non-critical areas to lower costs. Defenses and detection should be commensurate with the data’s importance, with the environment, and with the risks faced by the data.”

The challenges that April mentions and what cascades from them require a different approach, a change in mindset. But what values and psychological triggers should cyber security specialists appeal to in order to help integrate cyber security as part of the mindset in a company or, on a larger scale, of most people who use the Internet and technology in general?
April put the dot to the i when replying that “An organizational culture of security starts with the Leadership team (i.e. from the top).” She also emphasized that “When a company appreciates the importance of security or privacy, it shows in everything they do, and their decisions will be guided by those values. A company (or society) may need to stand up for what is right in the face of demands being made that may violate their ideals of security/privacy. Doing what is “right” is important when protecting the privacy of employees, users, or citizens.”
What’s more, her experience proved that “Positive reinforcement of good behavior is always better than negative. Gamification and rewards can trigger competitiveness to achieve, and when used in an infosec context, employees can become encouraged to exhibit more security awareness. For example, punishing an employee for failing to report a phishing email is NOT going to be as effective as offering a prize to the employee with the most phishing emails reported at the end of the fiscal quarter.” But do people really change their minds? It’s easier to see these shifts through the eyes of a specialist who’s been in the field for over 25 years.

“Security is finally at the forefront of people’s minds, but it’s not always in a good way. People understand that there are malicious entities out there, and most people have probably had their identity involved in a breach at some point. The average person still does not necessarily understand what their individual role is in the larger picture, or what it takes for us to defend against the bad actors. Our work is challenging and sometimes thankless.
Infosec is like fighting an uphill battle, and it definitely takes a village. There is a much larger community of hackers and infosec defenders today, which is a very good thing. We are learning and sharing and growing together. Unfortunately, today the average person is far more likely to hand over their personal info for a $5 online gift card than they were. Whether it’s targeted advertising, social media, or creating an account during shopping cart checkout, we are mindlessly handing over our data every day to we-don’t-even-know-who for we-don’t-even-know-what. P.S. if a service costs you nothing, you are the product!
I see people caring less about privacy as a basic human right and more about things they want being easy or cheap. How many contests and sweepstakes exist solely to gather user data? If we had to pay out of pocket for social media, it definitely would not exist like it does today. There are good things, too, as so many of us are trying to fight the good fight. Take for example the free service LetsEncrypt, which is getting more people using TLS certificates. Or security tools like no-cost anti-malware or encrypted password managers. When security and privacy become more simple and inexpensive, it’s going to make a huge difference to society.”