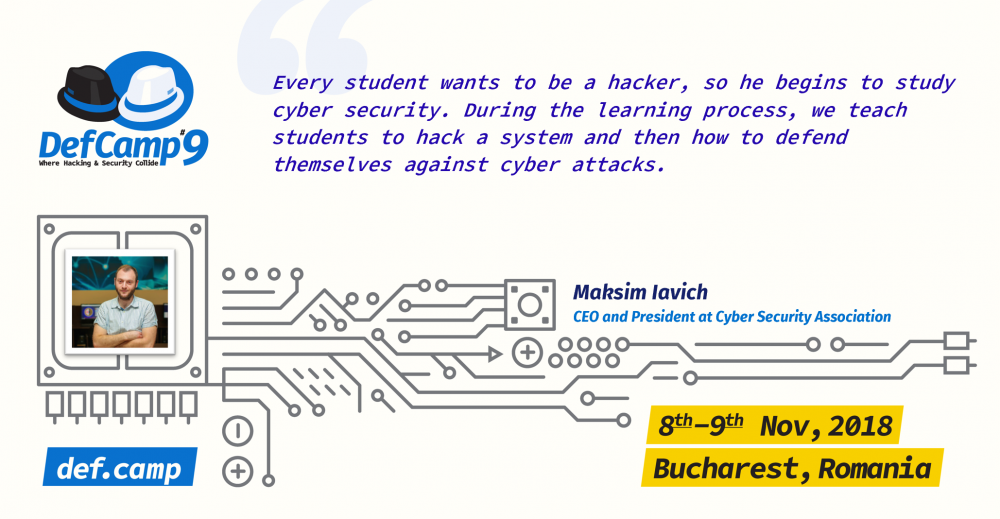 Quantum computing is something that can stir both excitement and curiosity to dive deeper into the topic and learn more. And who’s the best person that can explain to us more about quantum computing and how will affect cybersecurity than a professor of computer science? 🙂
Maksim Iavich holds a Ph.D. in Mathematics and he’s a computer science professor and the head of Cyber Security Direction at Caucasus University.
He is also the CEO & President of Scientific Cyber Security Association (SCSA), and the author of many scientific papers with topics like cryptography, post-quantum cryptography, quantum cryptography, mathematical models and simulations.

Quantum computing seems to be one of the emerging technologies everyone is talking about. It starts to gain traction, as it brings next-generation and powerful computers capable to solve complex problems. It can also be a game-changer in cybersecurity and it could become a reality sooner than we think.

Maksim can’t foresee a specific timeframe for it, but he outlines that:

Quantum computing will be released rather soon because a lot of active work is being done to create and develop quantum computers. Google, NASA and the Universities Space Research Association (USRA) have teamed up with D-WAVE, the manufacturer of quantum processors.
Modern traditional cryptographic schemes are vulnerable to quantum computers. A quantum computer can easily crack all systems based on the problem of integers factorization, including the RSA cryptosystem. So, as we see, quantum computers will be able to break almost all existing cryptosystems.

Security researchers and specialists are worried about these capabilities to break cryptosystems and bypass security protocols. The National Security Agency actually warned about the power of quantum computers and how they will “neutralize our best encryption”, making it the next big security risk for (sensitive) data protection.

Speaking of security risks, we asked Maksim about his thoughts related to the most vulnerable standards currently in use, and the risk associated with them breaking down or succumbing to un-patchable vulnerabilities.

Quantum computers are capable to break cryptosystems, based on the method of integer factorization that uses Shor’s quantum algorithm. This means that quantum computers can break the RSA system, which is one of the most common public-key cryptosystems used to secure data transmission.

RSA cryptosystem is used in many products on various platforms, in different areas, as well as many commercial products, and the number increases every day. This cryptosystem is integrated into various operating systems from Microsoft, Apple, Sun, and Novell. The RSA algorithm is also used in hardware to secure phones, network hardware, or different smart cards. This algorithm is commonly used in cryptographic hardware and is part of protected Internet communications protocols, such as S/MIME, SSL, S/WAN.

A large number of leading organizations, such as government, banks, giant corporations, laboratories, different institutions or schools, rely on the RSA algorithm for data encryption.

RSA can be considered one of the most common public key cryptosystems, and it was developed years ago, same time with the development of the World Wide Web.

Hacking the RSA cryptosystem will cause a complete chaos.

Maybe this could be an interesting topic that could enhance interest for students to pursue a career in cybersecurity.

Knowing Maksim’s experience as a University professor who worked closely with lots of students, we were curious to find out what is their primary motivation to start a career in cybersecurity.

Of course, every student wants to be a hacker, so he begins to study cybersecurity. During the learning process, we teach students to hack a system and then how to defend themselves against cyber attacks. Special virtual projects are used for this. Along the process, we try to convince students that it is much better to protect the system.

It’s worth mentioning that it’s a high demand for cybersecurity specialists in the world, including for Georgia State. Most students choose these subjects to find a better place to work and we give them the opportunity to be part of our projects, and this motivates them even more.

We know there’s no such thing as one linear path to pursue a career in cybersecurity, and often it helps testing more fields to discover which one students will enjoy more.

Here’s how Maksim sees the learning process for students with a keen interest in cybersecurity:

Students like to study subjects like software security and cryptography, mostly for the practical part of it. When learning about these subjects, we use virtual projects, so students can break and fix the systems themselves, which makes it very interesting for them.

It must be mentioned that these subjects are rather difficult, so we teach them on the third and fourth courses. Caucasus University has a top School of Technology, so students have a solid background when they begin to study these subjects. Students often use these cybersecurity skills they gain to apply in organizations they are working for.

We are so close to another two intense days of learning about cybersecurity from our speakers and nurturing valuable connections with the awesome people from the infosec community.

At the same time, we can’t hide the excitement and joy of seeing how the infosec community keeps growing day by day, and how we are all united by a common goal: to make everyone more aware of cybersecurity.

Maksim will be on the DefCamp stage for the first time and he’s really excited about coming to DefCamp 2018:

I want to thank the organizers of this conference for giving me this great opportunity.

We also like to thank Maksim for sharing this interview and don’t forget to join us and see Maksim’s presentation live on November 8-9! See you soon!
This interview was made by Ioana Rijnetu. You can get in touch with her on LinkedIn or say hello on Twitter.