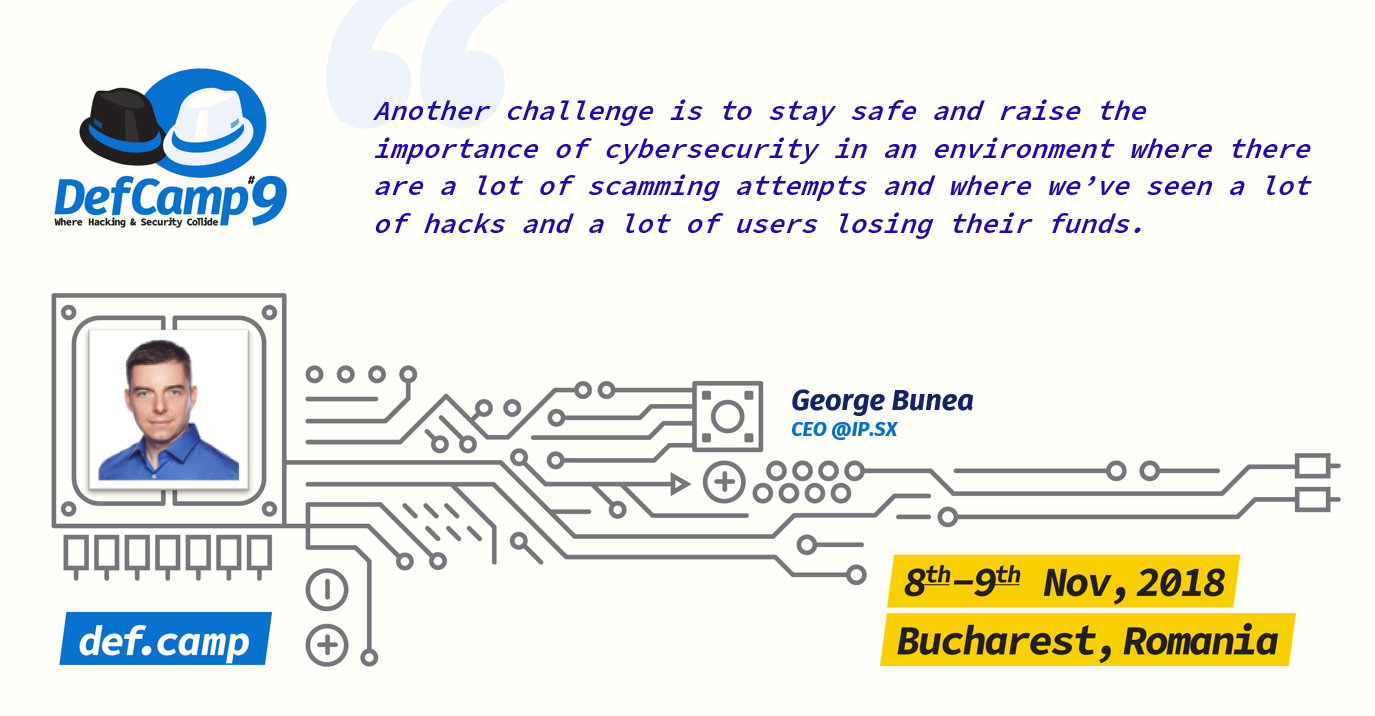 It’s time to talk about the B word.
Even if you’re not a blockchain enthusiast (or believer), you can still learn A LOT from the interview below.
Blockchain tech is here to stay and the easiest way to build your knowledge and understanding of its applications is to learn directly from the pros.
George Bunea, CEO at IP.SX (IP Exchange), gave a detailed outlook of the most important developments in blockchain-powered applications in the industry we know and love: information security.
Having a partner that deeply understands the changes and advances in this emerging and dynamic market is a great opportunity for the DefCamp community. So let’s dig right in!
For those of you who aren’t yet familiar with the main use cases for blockchain in information security today, George’s focused remarks will bring you up to speed:

Blockchain as a technology brings a whole new dimension to information security.
The main advantages of the blockchain, among others are the fact that this technology provides a way to record transactions or other types of digital interaction in a manner that’s designed to be transparent, resistant in time, secure, efficient and auditable.
Also, blockchains allow different parties that do not trust each other to share information without requiring a central administrator.
Last but not least, being a decentralized solution, it covers the single point of failure that is present now in the traditional client-server internet model.

While the blockchain has many benefits, there are still plenty of challenges in implementing it as a key layer in data security and data privacy.
As with most complex issues today, the answer is never straightforward. George believes that:

Blockchain is a new emerging technology. By its design, it covers data security due to its cryptographic and decentralized models.
In terms of data privacy, however, the challenges are a little more complex.
One of the main advantages of the blockchain is that being decentralized and having different layers of cryptography sensitive data can be securely stored and accessible in real time from any part of the world.
This will bring a whole new dimension into the health industry, insurance and other industries that now have a lack of accessibility to sensitive and private data due to the limitations of client-server architecture.

If you’ve been involved in tech for a while, you most likely know that changes like this one happen gradually. That’s up to the point where things accelerate and go mainstream, which, for end users, might seem like an overnight phenomenon.
George shares when he believes this might happen for the blockchain:

This technology will become truly mainstream when the end-user will use applications without knowing that in the back the apps are build using blockchain technologies.
It’s like nowadays when the end user uses the internet but he is not aware of the protocols and layers that are used in the back when accessing different servers.

But before things become so simple that you forget they’re there, blockchain will make an impact across the world. That includes having an effect on current data mining practices.

They [blockchain apps] have the potential to unlock a whole new dimension in data mining practices.
Data is a valuable resource and our society became more dependent and reliant on data especially with the advancement of AI and Machine Learning algorithms.
One of the negative aspects related to data is that, nowadays, a very small number of companies and organizations have control on both data and AI capabilities, which poses a threat to the freedom of our society and to the access of regular people to valid and correct data.
Blockchain companies already started building protocols and ecosystems that allow sharing of data and data related services.
Adding on top of that a layer of incentives through tokens create the potential to put the data providers and data requesters face to face in a trusting and transparent environment unlocking the potential of unanalyzed data.
PS: As a short observation: only around 1% of the produced data is currently analyzed and this needs to change in the coming future.

This aspect is researched by multiple companies and foundations at this moment.
There are even some governments that are analyzing the possibility of adding user identity on the blockchain.
One aspect that is very important and that I would add is the “Zero Proof Knowledge” concept. I will not explain it here, as it takes some time, but please google it. It’s a very interesting concept that can be used for building user identity online and, at the same time, keep the user data confidential.
Also, what is important to mention is the reputational system that can be built using the blockchain. We can have identity and reputation under the same roof.
To conclude, I would say that blockchain can have a huge impact on user identity and reputation, both online and offline. There are still things to clarify and prototyping to be done but it’s only a matter of time until we will see huge improvements for this chapter.

Some say that the blockchain will engender a rebirth of decentralization. In fact, this is one of the core values of the internet and it was a key asset in its early development stages.
Recent developments, big tech companies, and monopolies over data harvesting and manipulation have alienated the www from its founders’ principles. Can the blockchain restore its independence?

I would say that it’s already doing this.
We see remote teams working in a truly decentralized way, we saw new models of raising funds at a global level through the token sales models (ICOs – Initial Coin Offers).
We already saw strong communities rising and providing support to the projects that they believe in. I saw people that never met joining forces for a common vision and the list can go on.
So the decentralization rebirth is already taking place.
Not to mention that this new mental state is grasped by more and more individuals, step by step, giving them a new way of seeing things through a truly decentralized perspective. As this new concept begins to be understood, the concept of decentralization begins to work at whole new levels: technological, economic and even social.

However, as many of us know, turning theory into practice is a road littered with challenges. Here are the most interesting problems that George and his team at IP.SX are looking to solve at the intersection between blockchain and information security:

The biggest challenge at the moment is to find the right balance between research plus prototyping and actually delivering working products.
Blockchain technology still has issues that need to be addressed, issues like scalability and user-friendly apps. There is also a need for researching how to best implement this technology in order to provide a good user experience and a solid working product.
Also, another challenge is to stay safe and raise the importance of cybersecurity in an environment where there are a lot of scamming attempts and where we’ve seen a lot of hacks and a lot of users losing their funds.

Building trust in companies focused on building blockchain apps is going to be a complicated process, especially because of fraudulent behavior. Still, it’s not impossible to achieve.
If you’re curious to explore more and take the conversation further, you can meet part of the IP.SX team at DefCamp #9, in Bucharest, in just a few weeks! Get your ticket and see you there!
This interview was made by Andra Zaharia. You can get in touch with her on LinkedIn or say hi on Twitter.
DefCamp is powered by Orange Romania and it’s organized by the Association “Research Center for Information Security in Romania” (CCSIR).
DefCamp 2018 is sponsored by Ixia, Keysight Business, SecureWorks and Intralinks as Platinum Partners and it’s supported by IPSX, Bit Sentinel, TAD Group, Enevo, Crowdstrike, CryptoCoin.pro, Siemens, Alef, UiPath, Atos and Kaspersky Lab.