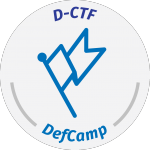 What is a CTF?

Capture the Flag (CTF) is a computer security competition. CTF contests are usually designed to serve as an educational exercise to give participants experience in securing a machine, as well as conducting and reacting to the sort of attacks found in the real world. Reverse-engineering, network sniffing, protocol analysis, system administration, programming, and cryptanalysis are all skills which have been required by prior CTF contests at DEF CON. There are two main styles of capture the flag competitions: attack/defense and jeopardy. In an attack/defense style competition, each team is given a machine (or small network) to defend on an isolated network. Teams are scored on both their success in defending their assigned machine and on their success in attacking other team’s machines. Depending on the nature of the particular CTF game, teams may either be attempting to take an opponent’s flag from their machine or teams may be attempting to plant their own flag on their opponent’s machine. One of the more prominent attack/defense CTFs is held every year at the hacker conference such as DefCamp where this activity is expected every year.
DefCamp Capture The Flag (D-CTF) is the most shattering and rebellious security CTF competition in the Central Eastern Europe. Here, the most skilled hackers & IT geeks put their knowledge to the test and get into the best of the best top 10, to later win the D-CTF event or, die trying.
There is one important rule though – hack before being hacked!

D-CTF has an online qualifications phase that will last for 24 hours and best 10-15 teams from this round will get into the final that will happen in Bucharest, Romania during DefCamp 2016. The challenges are exotic and contain real life scenarios about the latest threats from different fields such as: Cyber War, Cryptography, Steganography, Web Security, Network Security, Data Forensics, Reverse Engineering and many more.
Check here what teams will come in Bucharest on 10-11 November to fight for supremacy and win the D-CTF 2016 title!
Hacking Village is proudly supported by Beyond Security. DefCamp it’s the most important conference on Hacking & Information Security in Central Eastern Europe, bringing hands-on talks about the latest research and practices from the INFOSEC field. Since 2011 is gathering under the same roof decision makers, security specialists, entrepreneurs and developers.
The main sponsor for DefCamp 2016 is Orange Romania who is also the Internet provider of the event. DefCamp is also supported by Bitdefender as Gold Sponsor, SecureWorks, Ixia, Enevo Group, Bit Sentinel as Silver Sponsors.