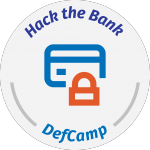 Are you a true hacker? Hack The Bank and prove this to everyone! HTB is a competition that challenges participants to hack into a banking system* and withdraw money from an ATM located at the event location. The competition takes place in 2 phases. The first phase challenges the participants to find and exploit an online banking system*. Upon successful exploitation they should top-up their accounts with money. In the second phase the participants should cash out their money from an ATM using a card they were previously handed. There will be cash prizes for the first three participants who were able to successfully withdraw money from the ATM.
Hacking Village is proudly supported by Beyond Security. DefCamp it’s the most important conference on Hacking & Information Security in Central Eastern Europe, bringing hands-on talks about the latest research and practices from the INFOSEC field. Since 2011 is gathering under the same roof decision makers, security specialists, entrepreneurs and developers.
The main sponsor for DefCamp 2016 is Orange Romania who is also the Internet provider of the event. DefCamp is also supported by Bitdefender as Gold Sponsor, SecureWorks, Ixia, Enevo Group, Bit Sentinel as Silver Sponsors.